What is Linen? All the Key Information

Linen is a wonderful fabric that is often used in home furnishings and for some apparel and clothes where there is a desire for a mid-weight fabric that is suitable for hot and humid conditions.

However, natural linen is also relatively difficult to manufacture and so this version of the fabric has struggled against alternatives such as cotton.

Instead, modern synthetic linen essentially provides the best of both worlds – the benefits of linen as a fabric, but far easier to manufacture and so competitive on price too.

In this page, we will look at both – natural linen and synthetic – but it is the latter that is of more interest nowadays.

Linen is one of the oldest fabrics, with a history dating back at least 30,000 years – indeed it may stretch back far further still. Certainly, whenever humankind started making fabrics, linen was a very early option. 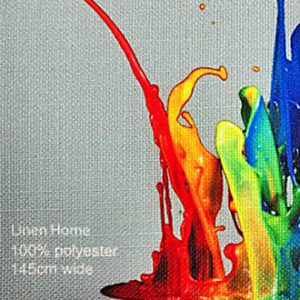 Much of linen’s initial history is linked to warmer climates such as Asia and southern Europe, this because it has superb qualities as a fabric that is durable but also enabled rapid sweat cooling. Linen is a fabric that dries quickly, is breathable and does not retain moisture.

Anyone with linen products will have noticed how quickly they dry, especially when compared to other fabrics you may be washing at the same time.

Linen grew in popularity in the UK and Ireland sometime later – but by the 18th century Belfast was sufficiently important in the production of this fabric to have acquired the moniker ‘Linenopolis’.

How Traditional Linen is Made

Prior to the development of synthetic linen, there was a somewhat labour-intensive approach required to produce this fabric.

It is also worth noting that for all the huge advances of modern technology, natural linen still remains labour intensive, and always will be, especially in comparison to other fabrics.

Given that other fabrics can often fulfil the same requirements, this means that natural linen can at times be partially a status symbol. It is a luxury, expensive option.

The first stage of linen production lies in the planting of flax seeds, and these seeds then need to be grown and carefully monitored.

When ready, the flax will be harvested and then a process of separation is required, this to remove the leaves and seeds.

Five more stages are required to produce a useable fabric – these are breaking the stalks up to separate out the inner fibres – these the ones which go on to be used.

Combing then further separates these inner fibres into thinner strands, after which they require a spinning process.

After this stage, the fibres must be reeled on to a bobbin and there is still one more stage – a careful drying process.

As this demonstrates, this is a significant amount of energy and effort to produce the finished linen fabric – after which it can be made into the desired textile products.

Linen is used for the following:

This is perhaps the main use globally – and especially here in the UK. Linen is popular for napkins, towels, tablecloths and more.
Linen is also commonly used for bedding products such as sheets, duvet covers and pillowcases.

Linen made via the labour-intensive traditional approach is now increasingly rare in clothing, but it still has some use this way globally.

The material is popular where people want a durable, lightweight material that is also suitable in hot and humid conditions – these not necessarily the most common conditions in the UK.

You will find linen in t-shirts, shirts, trousers, underwear, lingerie, dresses, nightgowns and often in jackets in hotter climates.

Natural linen can be used for other items, one such use is for the canvas an artist would paint on, but the cost of production would typically make other options favourable. Reusable nappies can also use linen.

Linen is traditionally classified by the weaving method.

There are four categories, as below.

Damask is a delicate form of linen with an ornate look.

This form of linen, whose name derives from Damascus – formerly a central city in the textiles trade – would only usually be used as a decoration or a special occasion.

As the name implies, sheeting linen is often used in bedsheets and similar. It has a smoother appearance and utilises a close weave and high-thread-count.

Sheet linen in the densest of linens.

Linen with a plain weave is common in towels of all types, from the humble tea towel through to a luxurious bath sheet.

One reason it is used in this way is that it is hard-wearing – this is a fabric that can be used over and over, used to dry people or items, washed in the machine, used again. And repeat…

The loose weave linen is not particularly durable and so ultimately falls between stalls, not as ornate as Damask, not as practical as plain weave or sheet linen.

Loose weave linen is not regularly used, even by the overall standards of natural linen.

Synthetic linen is 100% polyester, modern processes creating a fabric that has the same properties as natural linen but is also far easier to produce.

The synthetic option also does not require the burden of large areas being given over to flax production, that being a fairly inefficient use of the world’s limited resources.

Synthetic linen is very similar in appearance to the natural product and also typically has the same uses.

Differences between Synthetic and Natural Linen

The key differences are in the production process. Whereas natural linen is created from flax plants and then a laborious, multi-stage process, synthetic linen is a 100% polyester material.

The end uses are typically very similar, as with natural linen, the polyester version is very popular in bedding, towels and also some forms of apparel.

The weave is as of natural linen, with a slub-weave construction

Synthetic linen also has advantages should you wish to print on to the fabric, the clean nature of the fabric and white colour are near-perfect for printing and the faithful HD reproduction of artwork. This is shown by a washing fastness rating that is typically four out of five and a lightfastness of six out of eight.

Synthetic linen is popular in the high street store requirements.

The synthetic product has a fabric weight of 280 g/m2.

Durability is superb – this is a fabric that can be washed at 40 degrees and can be ironed.

The uses for synthetic linen are largely the same as natural linen – these including:

Synthetic linen can also be used for clothing, though this is not its most common usage.

Cotton has many similarities to linen. It is also worth considering Straw Weave and Rib fabrics.

Is Linen Suitable for Your Needs?

We appreciate that the huge range of fabrics can be confusing – often many options would be suitable for any particular task.

However, it is also true to say that there is often a best option, and this will vary by the specific nature of the task being undertaken.

At Citrus Rain, we are experts in textiles and also the printing of custom designs – we have worked with companies for whom brand is essential, clients including Mastercard, BBC< Lego, Adidas, Virgin and successive Olympic Games in London and Rio.

We are hugely proud of our reputation for quality and reliability. On site, we have numerous testimonials from previous customers – these with details of the business we supplied and the nature of the order.

On Google, we have a full five-star review average.

You can chat with us prior to any order to discuss your requirements and we can advise as to the best options to suit your needs – you may be unsure which fabric would be most suitable, allow us to help.